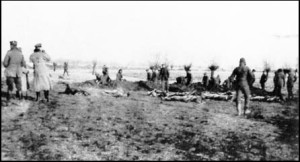 It is the nail that sticks up that gets hammered flat.

I was recently watching a programme commemorating the hundredth anniversary of the start of the First World War. The programme showed clips of interviews with survivors of the Western Front, both British and German. One particular interview caught my interest, it concerned the 1914 Christmas Truce between the British Expeditionary Force and the German army along part of the Western Front in Belgium.

The now elderly, young British subaltern was still bemused, fifty years after the event, by a conversation that he had had with a young German officer.

While they were burying their dead, he had asked what the German was writing on a simple wooden cross. The German replied that he was writing “For Freedom” and “In the Sight of God”. This was the cause of the young officer’s confusion, for this is what the British believed that they were fighting for as well. Freedom, and God was surely on the side of the British.

So why exactly were they all fighting?

For a few brief hours the soldiers on each side gave up their attachment to the idea of country, army, regiment, and war. Instead they let these ideas fall away, giving up much of what they had held to be true since childhood, and celebrated their common humanity.

The young officer also seemed to recognise the conflict that exists in the human mind, trying to reconcile two seemingly opposing facts. Although we are all unique individuals, we are also a single, solitary human among the seven and a half billion who live on planet earth.

The difference between the beliefs and wishes of the individual soldiers and what “The Army” required of them mirrored this universal dilemma. War demonstrates the power of training and culture to divide one man from another.  Trying to work out a balance between these two conflicting concepts is how we come to believe that what we are told or trained to believe, is both real and true.

Our sense of self is made up of many elements, many of which are subtle and to a great extent, things of which we are unaware. For the first ten years or so, we learn how to be a human being, in our family, in our village, in our culture, in our country.

Each individual component of this upbringing leaves it’s mark in the way of ideas and beliefs about ourselves and the world.

As children we tend to soak up these ideas with our mother’s milk and rarely challenge them.  Adolescents question things much more, as they are in the process of discovering themselves, and working out who they are, the task of Individuation. A process of finding a niche in the world that makes sense to us, a way to balance our unique human characteristics in the form of our own, specific genetic make up and environmental experiences, with merely being a standard issue human being.  Finding a way to balance the two seemingly opposite experiences of both being run of the mill, and special at the same time.

When we recognise how much we have in common with the rest of humanity this inspires us to have respect for others, to be compassionate and to show humility in our achievements.  While recognising that we are an individual promotes a sense of pride in what we do, self development, achievement and sets free our creativity.

Too great a sense of being special causes problems, as does a blind following of some dogmatic “law”. When people are too special, this leads to a situation where some believe that only they have the answers. Only they have a copyright on the truth, or are chosen for some special purpose that sets them above others.

This leads to divisions in the world and artificial boundaries between us and them. They then set out to impose their truth on others, and see those who have a different truth as less worthy and so can be treated badly. A world in which slavery, the holocaust, Rwandan massacres and genocide are possible.

Ultimately this  lead to two well educated, but confused, young men meeting in no man’s land on December 25th 1914. Each representing one version of the truth as espoused by their countries, even if not their own personal view.

In fact, the whole notion that who we are is limited to the story of a single self is perhaps the main illusion that spiritual practice addresses.  this is why one of the deepest teachings is that there is no one special that we need to be. In other words, to be inwardly free means that we don’t have to live out of our self-images and identities; we don’t have to feel a particular way; we don’t have to believe the stories we tell ourselves – the stories that dictate who we are and how we live. Ezra Bayda

We live our lives out of habit, sleepwalking towards our deaths.

To fit into our society we live with an adapted sense of self, yet we often yearn to return to our younger state when “beginner’s mind” was still alive within us and had not yet been replaced by our conditioning.  Overcoming our conditioning allows us to switch back to a more authentic version of our self. Everyone loves to play.

One thing that I have found helpful in working towards this, is the astronomical idea of Mediocrity. The Theory of Mediocrity is used as an argument for the existence of other life forms in the Universe. It is a theory that argues that this is inevitable, that there is nothing special about us, our planet, or our solar system.

Most of what happens in the world is a consequence of natural, universal laws that apply everywhere and to everything. the universe is neither malevolent nor benevolent, it is entirely neutral.

There is really nothing special about being a human, if we had not evolved to be the top predator in the world, some other species would have done so

We start to develop when a sperm meets an egg. We each receive a random mix of genes from our parents, a different sperm or a different egg and we would not exist. What determines how we continue to develop, both as a species and as individuals is a mix of environmental adaptation and chance.

We are all unique individuals because of a combination of the general, being human; and the specific, the interaction of our genes and our environment. Our sense of self grows along with this, and we develop different selves depending on where we are, who we are with and what we are doing.

The different self often depends on which role we play, father, son, dad, doctor and colours how people see us and how we see ourselves. Yet somehow we cling to the idea that we are the same at all times. That we have a constant self that does not change from our first memories until the day we die.

For some reason we confuse the sense of self that we need to negotiate the world, the one that lets us know where we end and the rest of the world begins, with a concrete reality. Simply put how can we put our socks on if we are not there to do it?

Despite the evidence and logic to the contrary, we persist in having this picture of an enduring and unchanging self. The Buddha did not teach that there was no self, only that it is ever changing and does not endure from day to day.

Impermanence applies to all things and our sense of self is not exempt, no matter how much we might want it to be. There is nothing special about our self. Meditation can help us to see this.

By becoming aware of our inner world and automatic responses, we can come to find out how we work, what we think, where our beliefs come from and how we can chose not to react out of habit. This can give us greater freedom to live unimpeded by the false views and beliefs we have about ourselves and the world at large.

Charlotte Joko Beck wrote a book called “Nothing Special” and I think this sums up the mystery of enlightenment that brings happiness and meaning to our lives.  If we no longer regard things as special because of what they are, we can have our needs met more easily, and be more content.

If a car is not a car but a penis substitute it makes it difficult to be content as someone somewhere will have a bigger, brighter one.

If we can be satisfied with what we have, and  do not worry too much about what others might think about us, especially if that is more about what we have or what we do, then we can be free from much of our self inflicted suffering.

When we take the time to notice our world and everyone and everything in it, it becomes a genuinely awesome place.

In the words of Charlotte Joko Beck;

When nothing is special. Everything can be.